ProductsLivingProfessionalsAbout VitraMagazine
Products
Home Stories
Colour & Material
Designers
Limited-time Offer
Buy an Eames Shell Chair with seat upholstery and receive the seat upholstery as a gift. Offer valid from 1 November 2021 until 31 January 2022. This offer applies to all Eames Shell Chairs (Eames Plastic Chair, Eames Fiberglass Chair and Wire Chair). Seat cushions exclusively in Hopsak or Checker fabric (Wire Chair only with Hopsak fabric). The seat cushion is affixed to chair seat. The prices shown in the configurator as well as in your shopping cart already include the winter promotion discount. No further reductions are applicable upon check-out.

Charles & Ray Eames, 1950
The Shell Chairs by Charles and Ray Eames are among the most important designs in the history of furniture. Following their initial presentation at the 'Low Cost Furniture Design' competition organised by the Museum of Modern Art in 1948, the chairs were launched on the market in 1950 in an armchair version (A-shell) and as a simpler side chair (S-shell) – making them the first ever mass-produced chairs made of plastic.

With the debut of this revolutionary design, Charles and Ray Eames introduced a new furniture typology that has since spread around the globe: the multifunctional chair whose shell can be joined with a variety of different bases. Already in 1950, they presented a series of bases that enabled various sitting positions, including the low-slung LAR (Lounge Height Armchair Rod Base) with a geometric steel wire base, which quickly acquired the charming nickname 'Cat's Cradle' in reference to the children's string game.

The LAR seems to have been one of Charles and Ray's favourite designs: it can be spotted in numerous vintage photographs of the legendary Eames House in Pacific Palisades, both indoors and out. This also reveals how lightweight the chair is, and how easily it can be moved around.

Due to the organic shape of this classic armchair, the LAR is a striking solo piece, but it can also be paired with many types of sofas to create an appealing contrast. The LAR is offered as the Plastic Chair LAR with a polypropylene shell, or as the Fiberglass Chair LAR with a fibreglass shell that draws attention to the lively texture so valued by connoisseurs. The fascination of fibreglass lies in its irregular surface, whose clearly visible fibres make it appear almost like a natural material. The Fiberglass Chair LAR is not offered with full upholstery in order to show off the unique characteristics of this material to maximum effect. However, a comfortable seat cushion is optionally available.
from  855.00 EUR
Configure
Shop the lookSeat cushion#eamesfiberglass
Shop the Look 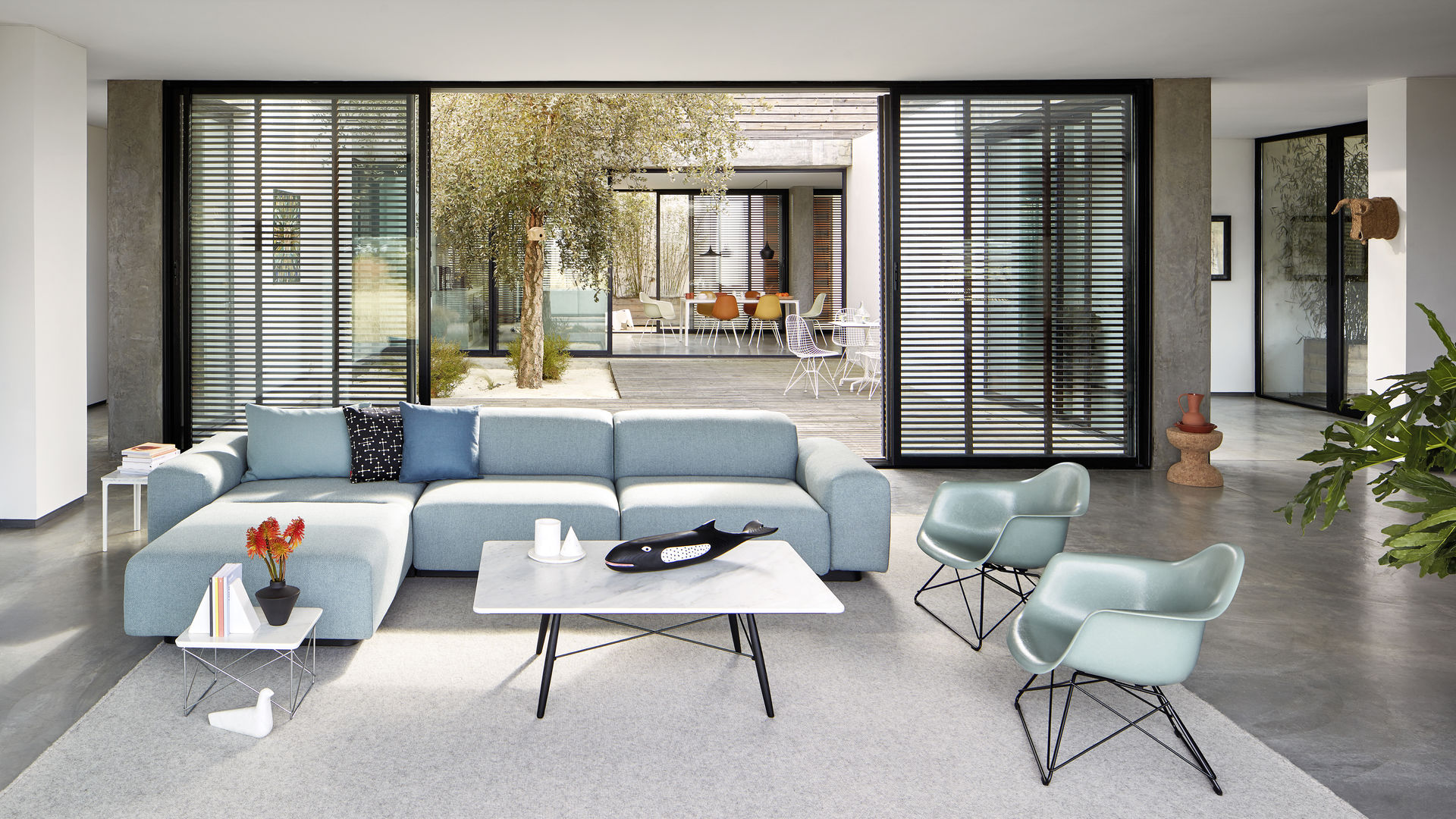 More details
Product family
Eames Fiberglass Chairs
In 1948, Charles and Ray Eames participated in the 'International Competition for Low-Cost Furniture Design' organised by the New York Museum of Modern Art, entering a chair with a seat shell moulded to fit the contours of the human body along with a concept for a variety of bases. Their design won second prize. However, the metal shell proved too complex and expensive to achieve successful mass production. The couple's search for alternative materials eventually led them to glass-fibre reinforced polyester resin, which until then had been primarily restricted to military applications such as aircraft radomes and cockpit covers. The Eameses recognised and fully exploited the advantages of fibreglass: mouldability, rigidity and suitability for industrial manufacturing methods. With this material, which was previously unknown in the furniture industry, they successfully developed the moulded seat shells for mass production: the Fiberglass Chair was born. Its organically shaped, one-piece shell proved to be a much-admired innovation at a time when chairs typically consisted of a seat and backrest. Fibreglass offered the added advantage of pleasant tactile qualities and a perfectly moulded form for optimal comfort. Charles and Ray developed a striking series of individual bases that could be freely combined with these shells – such as the Eiffel Tower version made of welded steel wire or the wooden base reinforced with metal struts. This combination of revolutionary seat shells and innovative bases gave the chair family the iconic traits that are still instantly recognisable today. Charles and Ray attached great importance to the use of colours – as fibreglass had previously only existed in a colourless version. They consequently spent many days in the factory, mixing hues for countless prototypes in their efforts to create colours that best accentuated the organic shape of both shell forms – with and without armrests – in a range of coordinated shades. The first colours developed by the Eameses were greige (a mix of grey and beige), elephant hide grey (to which Charles was referring when he said 'What I really want is a black with feeling') and the slightly transparent tone parchment. Colours such as sea foam green, yellow, ochre and red followed shortly after in the very early days of production. The Fiberglass Chairs were launched on the market in 1950, introducing a new furniture typology that has since become widespread: the multifunctional chair whose shell can be combined with a variety of bases to serve different purposes. In response to the enormous popularity of the chair, the choice of bases and colours was subsequently expanded. Over the course of the following decades, the Fiberglass Chairs became one of the best known furniture designs of the twentieth century. Vitra manufactures the Fiberglass Side Chairs and Armchairs by Charles and Ray Eames in several of the early original colours. The fibreglass shells are characterised by their lively visual appeal, which is much-prized today. Fibreglass owes its charm to an irregular surface, which appears almost like a natural material thanks to its clearly visible fibres. For enhanced comfort, Eames Fiberglass Chairs are also available with an optional seat cushion. The Eames Fiberglass Chairs are available alongside the Eames Plastic Chairs with polypropylene shells. Together the two chair groups form an extensive family, enabling countless variations of the classic Eames design, with a suitable version for almost every taste and purpose.
Learn more
Products
Professionals
About Vitra
Legal
Contact
Online Shop
COPYRIGHT ©2022 VITRA INTERNATIONAL AG. ALL RIGHTS RESERVED
Cookie Settings
Up